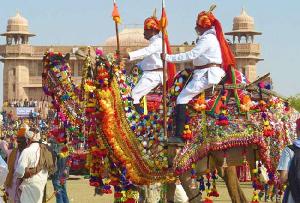 Pushkar Camel Fair- Traditions and Vibrancy worth paying a visit to

Festivals and celebrations bring people together. However, each country, each city and even each town has its own tradition that has been followed for several years. There are some very weird traditions that take place as festivals every year and some breath taking festivals that every traveller must be a part of.

We’ve found a beautiful upcoming festival that has brought several people together and continues to do so even today – The Pushkar Camel Fair.

Held in the Hindu month of kartik, the pushkar fair in Rajasthan, India is the place to be if you love some good old culture and a lot of colour. The fair takes place around the Pushkar Lake where most of the activity is centred around. As the name suggests, the Pushkar Camel Fair is an event that happens mainly for trade of livestock.

However, livestock trading does not just stop with camels and also includes cows, sheep, goat etc. The entire process of the livestock trading gives you a glimpse of how trade and other things would have been several decades ago before technology took over.

This year’s Pushkar Fair dates have been announced and they begin from 15th November and end on 23rd November. The fair is held in one of the humid places in the country, but since it is around the Kartik month, the climate is relatively cooler, making the festival a place to be in for an international traveller.

You can see culture being carried from generation to generation in each of the handmade items sold at the fair. India being a country of colours has several of its stunning apparel designs inspired from ancient Rajasthani styles. The entire fair is filled with local vendors selling products of authentic Rajasthani origin. All the stunning goods sold at the fair start from a very cheap rate while some of them are a little expensive due to the intricate detailing.

During the festival, you can see people around the banks of the Pushkar lake, just soaking in the festivities. There are several competitions held like the “longest moustache competition” or the all ladies tug of war.

Pushkar is about 10Km from away from Ajmer Railway Station and is also easily accessible from Jaipur. The fair brings close to 400,000 visitors together during the period and is an experience of a lifetime to witness the culture, heritage and vibrancy that the country has to offer.