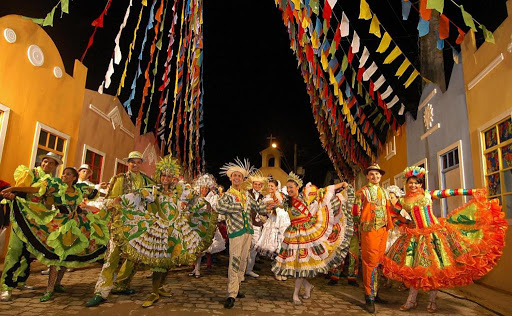 Festa Junina (port. Festa de São João) is a festival in honor of St. John the Baptist. The festivities begin on June 12 and continue until June 29. The holiday is rooted in paganism and is the astronomical analog of the winter solstice in the southern hemisphere. The Festa Junina is held in June, which begins the Brazilian winter. It runs throughout the country but is especially widespread in northeastern Brazil.    During the early history of Brazil, this festival was secretly held by the common people. Why secret - because on it the peasants ridiculed their masters, held a showy wedding, at which the priest and the judge appeared to be fooled. The Catholic Church tried to appropriate this holiday by choosing the right time for Saint Joan, but this did not take root everywhere.

Sometimes the Junina Festa  parties are even larger than the carnival in Rio. They represent an impressive interweaving of grandiose fireworks, dance performances, and, of course, the feast of the belly. Participants in the festivities invariably dress up in colorful costumes. Peasant robes are especially popular. Men dress up as farm boys with big straw hats, and women wear red plaid dresses and freckles. During the celebration, they arrange fireworks, make bonfires, and danced quadrilles, or just chat with friends. Children paint themselves stubble, depicting robbers - kangaseiros or peasants. There are food stalls everywhere where you can taste green kaldo soup, corn soup, kebabs, meat, fried sausages, cheese or meat pastels, various sweets, beer, and the Quentao drink, which is traditionally brewed at Festa Junin. Everywhere there are colorful flags and an atmosphere of joy and fun.

Quentao is a very popular drink in Brazil at Festa Junina. Quentao (pronounced quenteu) can be translated from Portuguese as "very hot" (from "quente" - hot). As the name suggests, it is served very hot, usually in winter, and is consumed to keep warm. Essentially mulled wine.